There can be an optional third output: reference or “index”, which happens once every turn.

They employ two outputs called A & B, which are called quadrature outputs, as they are 90 degrees out of phase.

The two output wave forms are 90 degrees out of phase, which is what quadrature means. For decoding in software, the A & B outputs are read by software, either via an interrupt on any edge or polling, and the above table is used to decode the direction. Others have detents of alternating 00 and 11 value, with staggered switching times during the transition between detents. 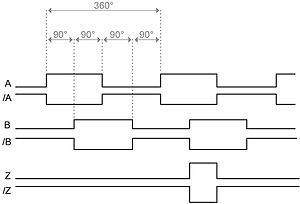 Incremental Pulse Diagram A, B, Z

Additionally some incremental encoders output a “Z” signal. Once every rotation, this Z signal is rising for typically 90°, on exactly the same position. Some incremental encoders also have additional differential signals, called “/A”, “/B” and “/Z”. Controllers can compare each pair (“A” must be equal to inverted “/A”) to ensure that there is no error during the transmission.

An observer, such as a microprocessor, will read (sample) the output of the encoder. The observer needs to sample the encoder output often enough so it does not miss any code changes. Consider the moving forward sequence 00 → 01 → 11 → 10 (3 steps forward).